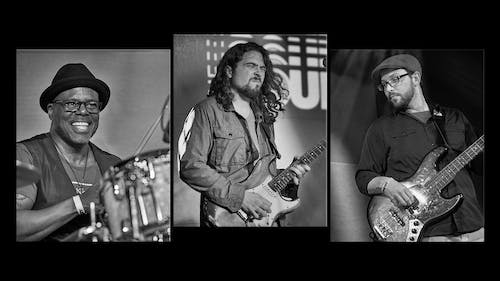 iCal
Google
Blues, soul, rock n' roll - the Jonathan Sloane Trio does it all LIVE from stage at The Hamilton Live!

Jonathan Sloane is a multi-talented, lifelong musician, instructor, guitarist and lyricist based in Rockville, Maryland, just outside of Washington, DC. His compositions, tone and lyrical lead guitar playing are deeply rooted in the blues; expanding into R&B, rock 'n' roll, funk and soul.

Having played to sold out crowds at both the local and national level with different bands, Sloane is a sought after talent in the Baltimore and Washington, DC music scenes.

He toured and made records with Baltimore native Cris Jacobs from 2016-2020 and now continues to tour with New Orleans singer/songwriter Anders Osborne.

Jonathan writes/arranges and performs with several other projects, each offering a unique outlet for his eclectic influences to shine.

Yellow Dubmarine (http://www.yellowdubmarine.com) is a tribute band that reimagines the beloved Beatles catalogue through syncopation and soul of early rock-steady, dub and roots-rock reggae. In addition to working out song arrangements, Jonathan contributes vocals and rhythm and lead guitar. Known for their live performances, in 2011, the band released the well-received studio album, Abbey Dub. The band has performed across the country, with gigs at the 9:30 Club in Washington, DC; Red Rocks Amphitheater in Morrison, Colorado; The Mint in L.A.; and The House of Blues in both Houston and New Orleans.

On September 14, 2018, Sloane released his solo record "Alive and Well" which truly showcases a plethora of influences morphed into an original sound.