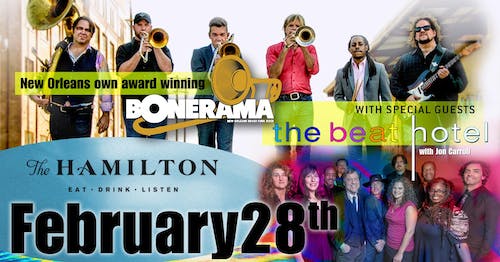 The Beat Hotel (with Jon Carroll)

iCal
Google
One of NOLA's finest trombone bands returns to The Hamilton Live just in time for Mardi Gras, joined by DC's own The Beat Hotel!

As their sound evolves and changes it’s still the best way to describe this 18 year old powerhouse trombone touring band from New Orleans, LA. In addition to changing the way people think about the trombone, the sound of Bonerama has become an influence and contribution to the sound of New Orleans music today.

With newer acts such as Trombone Shorty and Big Sam’s Funky Nation joining them on on the national music scene, it’s New Orleans that has benefited with a newfound reputation as being a bonafide “Trombone Town”. These bands carry the trombone like the trophy it truly is in New Orleans.

The band has performed and recorded with countless national artists such as R.E.M., OKGo, Tom Morello, Wayne Kramer (MC5), Jill Sobule and so many more, all while bringing their distinctive sounds from New Orleans to a national spotlight.

Festivals and events such as Monterey Jazz Fest to High Sierra Music Festival, Jam Cruise, Bear Creek Festival and of course the New Orleans Jazz & Heritage Festival only outline the extensive festival work this band has under its’ name. National television appearances on CNN and HBO (Comic Relief, Treme) have further exposed Bonerama to a wide range of unsuspecting new viewers.

THE BEAT HOTEL with JON CARROLL 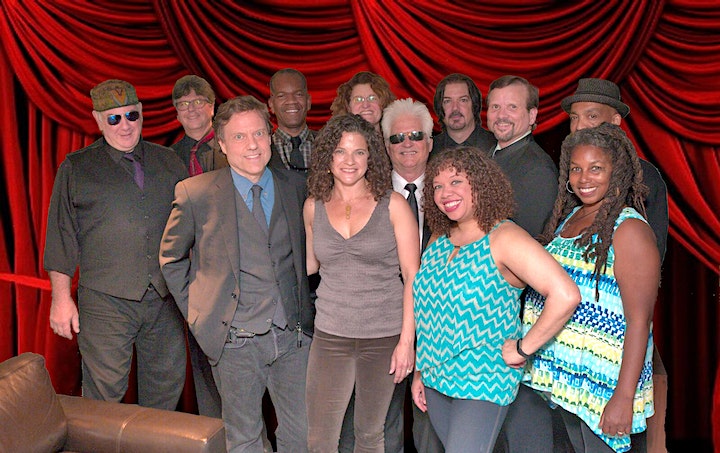 The Beat Hotel is a 10-piece band with a 3-piece horn section playing New Orleans Swamp Funk music. The band captures the Crescent City’s unique musical hybrid of R&B, funk, soul and blues with a wonderful groove sensibility that is both creative and fresh. With the roots of its music deep in the Bayou (The Neville Brothers, Dr. John, The Meters, Alan Toussaint, Lee Dorsey, Jon Cleary, Henry Butler, etc…), The Beat Hotel has well-crafted melodies, a kicking horn section, rich vocal harmonies and deep grooves that consistently energize Music Festivals and Club’s wherever they play.

and its name is The Beat Hotel. They have taken the heritage of New Orleans carnivals, parades and back street bars and turned it all into their own identifiable, body-rocking brand of rough and tumble party funk.”

Come on out and enjoy some real New Orleans swamp funk music!