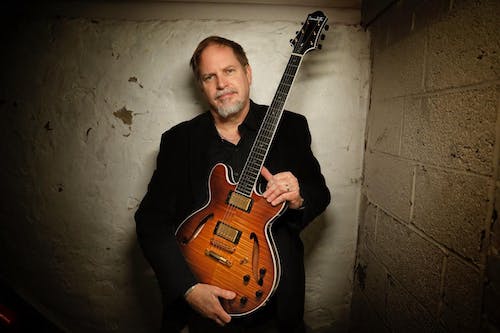 Whether you’ve heard guitarist Dave Stryker fronting his own group (with 30 CD’s as a leader to date), or as a featured sideman with, Stanley Turrentine and Jack McDuff, you know why Gary Giddins in the Village Voice calls him "one of the most distinctive guitarists to come along in recent years.”

Dave’s new CD “Eight Track III” has stayed at #1 on the JazzWeek Radio Chart for 6 straight weeks and received 4 stars in Downbeat.

"When it comes to ultracool & hip jazz, guitarist Dave Stryker is at the very TOP of the list… what an absolutely fun album. The album opener, “Move on Up“, alone, makes it well worth purchasing the full album. Jared’s organ just KICKS IT OUT on this superb tune! Stevie Wonder’s “Too High” is one of the best performances of the tune I’ve ever heard. The recording is just flawless. I give Dave & his superb players a MOST HIGHLY RECOMMENDED rating, with an “EQ” (energy quotient) score of 4.99 out of 5.” Dick Metcalf, editor, Contemporary Fusion Reviews

Hot House magazine awarded Dave the Best Guitarist Fans Decision for 2017. He was recently voted once again as one of the top Jazz Guitarists in the 2019 Downbeat Critics and Readers Polls. Dave’s new CD “Eight Track III” has stayed at #1 on the JazzWeek Radio Chart for 6 straight weeks and received 4 stars in Downbeat. Stryker grew up in Omaha, Nebraska, moved to New York City in 1980, and joined organist Jack McDuff’s group (1984-85). From 1986 to 1995, Stryker played with tenor saxophonist Stanley Turrentine. He has also performed with Freddie Hubbard, James Moody, Dizzy Gillespie, Jimmy Smith, Dr. Lonnie Smith, Kevin Mahogany, Steve Slagle and many others.

Dave is the Adjunct Professor of Jazz guitar at Jacobs School of Music at Indiana University, and at the John J. Cali School of Music at Montclair State University. Dave recently launched his online teaching school at www.artistworks.com. His book “Dave Stryker’s Jazz Guitar Improvisation Method” (Mel Bay Publishing) is available on his website at www.davestryker.com.

“..one of the most joyous feels around.” - Pat Metheny