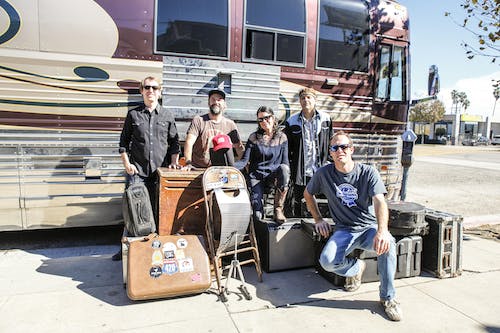 Donna the Buffalo offers everything you want in a roots band -- songs that matter, a groove that makes you dance, an audience that spans generations, and a musical voice that evokes a sense of community.

Dance in the Street, their first new album in five years, captures the dynamic energy that has earned the band the love and respect of their fans, “the Herd”, for thirty years.

Donna The Buffalo is well known for their lyrics about human potential and community. Throughout Dance in the Street, Jeb Puryear and Tara Nevins, the band’s co-founders, share songs of social commentary and self empowerment. “We feel the album provides an enjoyable ride between the general and the personal, from both male and female perspectives,” says Puryear.

Puryear took it upon himself to write a topical song after a friend slyly commented, “We could use some songs like you used to write.” That off-handed remark led directly to “Dance in the Street,” which falls somewhere between Bob Dylan and Bob Marley, with lyrics:

For change of rule, we had better stand,

Before there’s nowhere left to land,

It’s time to dance in the street.

Nevins adapted the imagery in the lyrics from “Dance in the Street” to create the globally-inspired album cover.

“My songs on this record are about letting go,” says Nevins. “Whether it be the attachment of love lost, the past, or the particular blue funk you’re coming out of.” Nevins in particular adds an interesting twist of “creating future” in Motor, the inspired second cut of the album with the chorus:

You’ll be dancing under the moon before too long,

You’ll be flying high as a kite when the wind gets blowing,

You’ll be right back where you started,

You’ll be holding tight to the motor that gets you going.

Donna the Buffalo joined forces with legendary Producer/ Engineer Rob Fraboni to record Dance in the Street at Sonic Ranch Studio in El Paso, Texas. Best known as producer of The Last Waltz soundtrack, Fraboni is also acclaimed for his work with Bob Dylan, The Band, Eric Clapton, and The Rolling Stones. Fraboni set out to capture the essence of Donna The Buffalo’s live performances on a studio record. He had the band record in a circle directly to tape. Dance In The Street is a fully analog recording all the way to vinyl. The track list alternates in his-and-hers fashion; even so, Nevins believes the album makes a cohesive statement. “We think of it as painting a picture and I like the picture that we’ve painted with this record,” she says.

Nevins and Puryear have nurtured a close friendship after meeting at an old-time fiddle convention years ago. In 1989 they landed their first gig in a Trumansburg, NY restaurant setting Puryear and Nevins on their musical path. During that time, Puryear took note of Nevins’ songwriting ability – “the first person I met that wrote songs that sounded like you could hear them on the radio”. While they mostly write separately, their music is often on the same wavelength.“ Our history is so long and very successful musically,” he says. “She’s my best friend – we’ve done this forever. It’s a big part of what makes it still interesting to do. We definitely have a good, rough-and-tumble, super-longstanding respect and love.”

Donna The Buffalo is not just a band, rather one might say that Donna The Buffalo has become a lifestyle for its members and audiences. The band has played thousands of shows and countless festivals including Bonnaroo, Newport Folk Festival, Telluride, Austin City Limits Festival, Merle Fest, and Philadelphia Folk Festival. At several festivals Donna The Buffalo has become the house band for closing the events by backing up artists including The Avett Brothers, Keller Williams, Zac Brown, Bela Fleck, John Paul Jones, and Chris Thile. They’ve opened for The Dead and have toured with Peter Rowan, Del McCoury, Los Lobos, Little Feat, Jim Lauderdale, Rusted Root, and Railroad Earth to name a few. They also toured with Ben & Jerry’s co-founder Ben Cohen to help raise awareness about increased corporate spending in politics. In 1991, the band started the Finger Lakes Grassroots Festival in Trumansburg, NY. The four day festival has become an annual destination for over 15,000 music lovers every year and was started as an AIDS benefit. It continues as a benefit for arts and education. To date, the event has raised hundreds of thousands of dollars and is now one of three Grassroots Festivals; the Bi-annual Shakori Hills fest in North Carolina and Virginia Key festival in Florida. In 2016 GrassRoots Culture Camp was introduced in Trumansburg, New York as four days of music, art, dance and movement workshops, including nightly dinners and dances.

“Successes? We have certainly tried to make a difference in the world, trying to inspire ourselves and others to treat their lives as a work of art, and our collective destiny as something that we are creating, not just something we are subject to. And at the same time we’re having a blast, who wouldn’t want to ride around on a bus playing music with their friends?” Puryear added.

The most loyal fans in the Herd are always eager to accept a call to action. Last year Donna the Buffalo started a crowdfunding campaign to buy a new tour bus; within three weeks, they had raised $90,000. “You can imagine how validating that felt for us,” Nevins says, still overwhelmed at the generosity.

By creating a bridge between generations, Donna the Buffalo attracts one of the broadest demographics on the festival circuit. When Nevins encounters young women in the autograph line, she likes to write “Girl Power!” She’s proud to see them looking up at the stage and watching a female musician really getting down, comprehending that they could do the same thing one day. In addition, Puryear has noted that Vietnam veterans have gravitated to the band. During a songwriting workshop, Puryear sang “Killing A Man,” which examines the complicated psychological ramifications of ending another person’s life. He felt uncertain about recording it, he says, until a veteran came up and asked him how he got those emotions exactly right.

Dance In The Street closes with “I Believe,” a song with a message of support. From the stage, Nevins often hears men and women singing it with her. “I think our message is encouraging. It’s something for people to latch onto,” she says. “And what an awesome sound and feeling to hear an audience en masse singing your song with you.”

Donna the Buffalo draws on a lot of musical influences, from country and rock ‘n’ roll, to bluegrass and old-time fiddle, as well as Cajun and Zydeco. In many ways, they were Americana before the term was ever coined. The common thread? Songs of the human spirit, and an incredibly tight relationship with their fans. 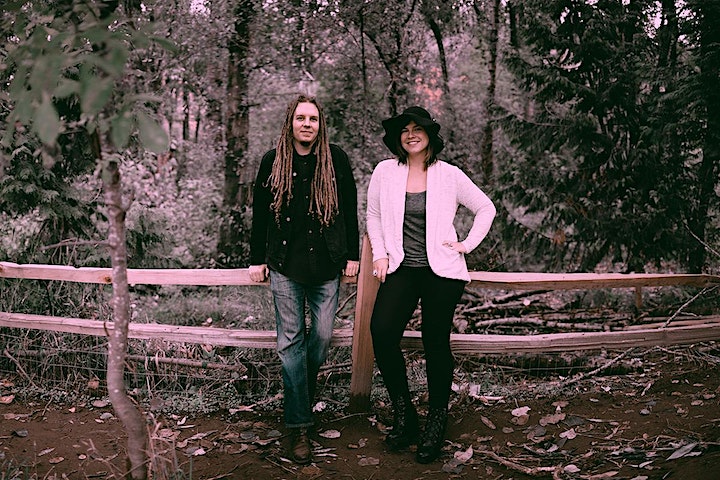 The first moments of Magnesium Dreams are arresting; Hill’s timeless, rapturous voice, soft yet strong, with the faintest hint of trembling edge, eases out of your speakers and into your heart. Imbued with an easy familiarity, yet speckled with unexpected sparking ornament, the record wraps itself around you, grasps your hand and waltzes you into its ornate, organic reality. Delicate melodies rise and fall as the tides, tender swirls of muse burst forth into lush, soaring arcs of song. Magnesium Dreams joyfully charts masters of their craft growing naturally into the next chapter of their unique creativity.

What started as a casual encounter more than a decade ago has evolved into a 2,500-mile-wide virtual rehearsal space. Hill was raised on a steady diet of 60’s and 70’s folk in a tiny, one-stop-sign Alaskan bush village. By eight she was writing songs, at thirteen plunking at piano, and by high school was strumming the guitar. Hill sang in symphonic and jazz choir with sufficient deftness to land a full scholarship for vocal performance to the University of Alaska. A year into her studies she headed south to the teeming metropolis (from her perspective) of Portland, Oregon to continue her education and begin her career in earnest.

Brian Daste grew up just about as far from Alaska as you can get in the Lower 48. New Orleans, Louisiana is and has always been a simmering musical melting pot, and Daste grew up figuring that being immersed in melody pretty much constantly was just normal living. By the time he hit high school he could play piano, guitar (acoustic, electric, and classical), saxophone, and pedal steel. In 2005 he too moved to Portland, slinging steel with Scotland Barr and the Slow Drags. In 2007 Daste got an email from a charming Alaskan inquiring about booking some time in his studio.

Hill’s brother Zach came down from Seattle, and they got to work. “A few days in, we were so impressed with Bryan’s work, we asked him to co-produce” says Hill. “As I prepared to release my second album in 2009, I asked him to join the band.” Together, the duo has released seven full length record, and played hundreds of shows as part of dozens of tours across the U.S., Canada, and Europe.

Magnesium Dreams marks a turning point in Hills career. Written during a time of recovery following the f facing of some difficult truths – both intimate and existential – the record is intended to take the listener on a journey of spirit and mind. “The song “Magnesium Dreams” set the tone for how we approached this album” explains Hill. “It is based in a dream world and we built the album around that idea. We wanted to take the songs and showcase their lyrical depth along with their sonic beauty.”

Sonically, the record grows from Hill’s deep roots in folk and Americana into a glorious web of interwoven threads of synth-pop, world tones, and symphonic indie rock. “These new songs lent themselves well to sonic experimentation” says Daste. “Personally, I get excited when a song that has both synthesizers and pedal steel! We’re just making music the way we want to hear.”

When Hill returned to Alaska in 2011 the pair were unsure of how smooth their collaboration would continue, but those concerns quickly proved themselves unfounded. Hill simply records rough demos to her phone and emails them Daste, who then goes to town fleshing out the compositions. “Often we end up with demos that are quite close to what ends up going on the record” says Daste. “In fact, I’ve even lifted instrumental parts directly from demos and used them on the final mix.”

Elegant, eloquent, and captivating, Magnesium Dreams is a multifaceted journey through the unique creativity of two soul-siblings, their spirits dancing and twirling together between the notes of this undeniable, timeless recording. “At its core this album is about the vulnerability it takes to face your own hard truths and seeing the beauty that lies in our shared humanity” tells Hill. “It’s about working at being okay with not having all of the answers; and being thankful we have the ability to ask big questions at all.”