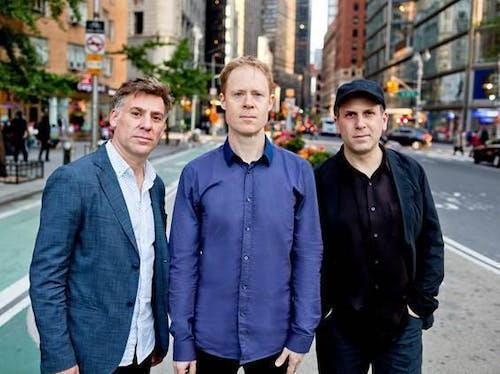 iCal
Google
"The trio of Larry Goldings, Peter Bernstein, and Bill Stewart Is the best organ trio of the last decade." - The New York Times

and Bill Stewart as "the best organ trio of the last decade." The trio, which has now

been together for over 30 years, has been recognized for charting new ground, with its

synergistic playing, and thoughtful music. They have over a dozen recordings, all of

which display their distinctive sound, whether exploring the depths of jazz standards,

or playing their own original compositions. Of their newest offering, Toy Tunes

not chicken-shack party stomps but instead some hip after-hours atmospherics...4

With his signature Hammond organ style and versatility on many keyboards, Boston

native Larry Goldings (b. 1968) has traversed not only the wide spectrum of jazz where

he is perhaps best known, but also the worlds of funk, pop, and electronic music. High

in demand as a sideman, Goldings' sound can be heard on scores of albums by artists

in a variety of musical genres.

Over the years, Goldings has been closely associated with John Scofield, Michael

Individual or Group for their album, Trio Beyond - Saudades (ECM).

Goldings also is active as a composer, arranger, and producer. His compositions have

Toots Thielemans. Goldings' music also has been featured in television shows and

motion pictures, including, The Office , Proof , Funny People , and Neighbors . He scored

his first feature film, Dealin' With Idiots in 2013, directed by Jeff Garlin, and is currently

Guitarist Peter Bernstein (b. 1967) has been an integral part of the world jazz scene

since 1989. He has been sought out by musicians from all generations - touring with

Konitz, Sonny Rollins, and Dr. Lonnie Smith and jazz stars of today such as Eric

As a leader, Bernstein has recorded six highly regarded albums, displaying not only his

masterful interpretations of standards, but also his inventive and lyrical compositions.

complexities of Thelonious Monk's music, while never becoming overshadowed by

heard...He plays the best of them all for swing, logic, feel and taste, and has paid

attention to the past as well as the future."

Originally from Des Moines, Iowa, drummer Bill Stewart (b. 1967) made his name as the

regularly since 1990. He is now one of the most sought after jazz drummers in the

world. Stewart's playing is distinguished by its melodic focus, and its polyrhythmic, or

layered, character. Although his drumming bears the influence of various melodic and

hard swinging drummers who preceded him, including Max Roach, Roy Haynes, and

Jack DeJohnette, Stewart's voice is clearly his own, and has influenced a younger

An excellent composer in his own right, Stewart has made several records as a leader

that predominantly feature his own music, bearing the same thoughtfulness, humor,

and impeccable taste that one hears in his playing. Stewart’s Blue Note recording