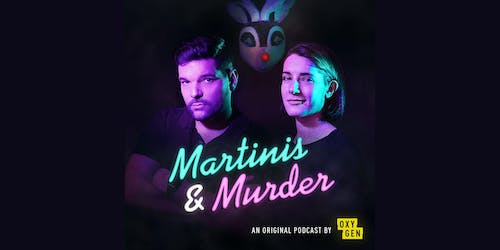 Martinis & Murder is Oxygen’s weekly true crime podcast hosted by John Thrasher and Daryn Carp. Launched in January, 2017, the podcast quickly made the “New & Noteworthy” section of iTunes, and has been downloaded nearly 10 million times.

From serial killers to mysterious disappearances to infamous murder cases, John and Daryn break down one murder per episode, making heavy subject matter a little more palatable by not checking their senses of humor at the door. Freshly shaken martinis by producer Matt the Bartender also help. John and Daryn not only tell the narrative of each murder but also delve into compelling and little- known facts about the lives of each killer and victim. What was the motivation? Was the killer a psychopath or a sane person who simply snapped? What was the impact on the victim’s family, friends and community?

Covered by The New York Times, Digiday, among others, “Martinis and Murder” was also recently listed as a “must listen” by Cosmopolitan. Martinis & Murder have performed live shows at SXSW in Austin, Crime Con in New Orleans, Halloween night in Boston, and at a sold-out Gramercy Theatre in NYC.