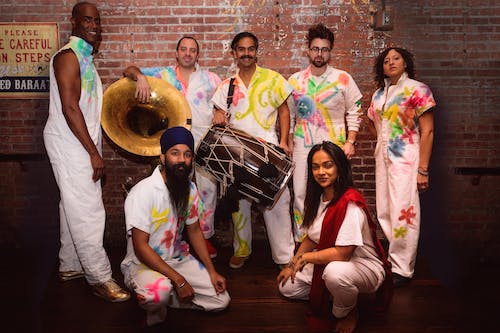 Red Baraat is a pioneering band from Brooklyn, New York. Conceived by dhol player Sunny Jain, the group has drawn worldwide praise for its singular sound, a merging of hard driving North Indian bhangra with elements of hip-hop, jazz and raw punk energy. Created with no less a purposeful agenda than manifesting joy and unity in all people, Red Baraat’s spirit is worn brightly on its sweaty and hard-worked sleeve.

There was a raucous finale. The last set belonged to Red Baraat, a Brooklyn brass band that looks to South Asia, pumping out Bollywood tunes and Sufi songs with a crackling beat (from the two headed dhol drum) and the muscle of horns blasting in unison, putting some New York bluster atop faraway roots.

Red Baraat’s June 2018 album release, “Sound The People”, hit the top 10 on the World Music Charts Europe and was heralded in the US as the anthem soundtrack for the South Asian diaspora by US hipster, indie-rock magazine, Stereogum:

The funk, ska-punk, and other American forms that make their way into the music are layered intricately within the same threadwork as the ragas on which these songs are pulled from. Each piece is a gesture of cultural harmony, rendering not only genre irrelevant, but the geographic placement of those sounds. The album is full of moments that hit with the force of a spiritual awakening.

The band’s most recent highlight performances include headlining Peter Gabriel’s renowned WOMAD Festival in Cáceres, Spain in front of 10,000 people, performing at the Vienna Konzerthaus (Philharmonie) in Austria, getting the crowd jumping at Sines Festival in Portugal and several sold out club shows.

The release of Red Baraat’s 2nd album in 2013, Shruggy Ji, debuted at #1 on the Billboard World Music charts in USA and propelled the band on a world tour that has yet to stop. They’ve performed at Bonnaroo, Austin City Limits, WOMAD, globalFEST, Lincoln Center, New Orleans Jazz Fest, along with clubs, theatres, and arts centers. Along the way they sold out rooms as diverse as the Luxembourg Philharmonic and the New York City’s legendary rock club Bowery Ballroom, and performed at the request of The White House (Obama), TED and Olympic Games (London).

But even as it’s clear that Red Baraat has built a startling history of performances in iconic settings, the band’s bread and butter remains the sweaty clubs, festivals, packed performing arts centers, and college auditoriums that keeps the band on the road all over the world the last several years. It’s here where Red Baraat does what it does best - communing with their audience in a joyful, near hedonistic celebration of music and dance, which tellingly, draws a crowd even more diverse than the players on stage. The universality of what Red Baraat does is undeniable. And this is no happy accident. It is the product of intention and design. Says Jain, “The band…our songs…are addressing the multiplicity of viewpoints,” says Jain. “There’s ‘Zindabad,’ which means ‘Long Live’ in Hindi. In that song, we’re saying that we celebrate life, we celebrate devotion — but we also celebrate agitation and revolution. If we can unite people of all backgrounds and ethnicities to partake in the exuberance of life through the universal language of music, then life is that much sweeter.” 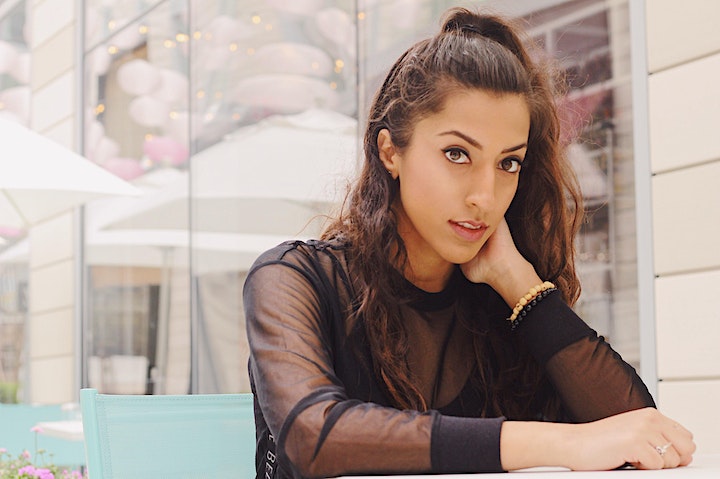 Listening to Anjali Taneja, a DC-based R&B singer/songwriter, it’s easy to hear how she seamlessly weaves soulful melodic elements with South Asian rhythmic influences. In an effort to tell her story as a child of immigrants through soundscaping, Anjali wields her powerful yet smooth voice over soulful beats sprinkled with melodies inspired by her Indian classical training. Having relentlessly listened to Motown and 80s R&B throughout her upbringing, Anjali combines old-school rhythmic feels with lyricism inspired by Sufi poetry. She recently released a song with acclaimed Punjabi singer Pav Dharia, and is celebrating the success of her single "Mood" reaching 200,000 Spotify streams world-wide with a 2020 Grammy after party celebration in Los Angeles. With a new EP around the corner, Anjali is a performer to watch for the new decade.