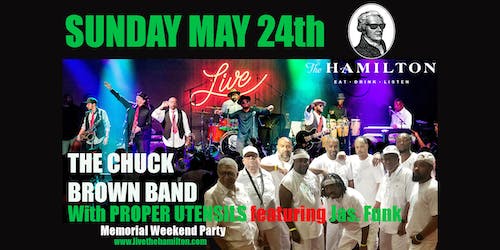 “The Godfather of Go Go,” Chuck Brown is the undisputed sole founder and creator Go-Go music, a hypnotically danceable genre deeply rooted in funk and soul that he developed in the early 70’s , and the only form of expressive culture to originate in the District of Columbia. Foreshadowing rap and many of the major popular R&B styles of the past three decades, Chuck's signature style earned him a place in American musical royalty. This esteem was maintained by the reputation of his legendary live shows, heavy on audience participation and built around “the beat” to create an unparalleled non-stop party atmosphere.

While searching for a sound to call his own in the 1960s, Chuck was deeply inspired by artists like James Brown. He latched onto the Latin percussion groove from the band he played with at the time, Los Latinos. Combining this with his roots, his love of blues, jazz, gospel, soul, and African rhythms, Chuck began to develop his own unique sound. Starting out playing top forty, Brown would break-it-down between songs with percussion and audience call and response, and keep the music going, and the dance floor packed.

His first hit was “We the People” on the debut album of the same name in 1972. Next came the album Salt of the Earth, with the hit “Blow Your Whistle” (sampled by Grammy winner Eve in 2007 in her hit “Tambourine”), and one of the most sampled break beats of all time from “Ashley’s Roach Clip” (including Eric B and Rakim, LL Cool J and countless others). In 1978, the Soul Searchers became Chuck Brown and the Soul Searchers, and Chuck’s original composition “Bustin’ Loose” took the #1 spot in Billboard, on Source/MCA Records. The song was used in Grammy winner Nelly’s 2002 smash “Hot in Herre,” and continues to be one of the most relevant and often sampled funk songs ever written (“Bustin’ Loose” was recently featured in a national television campaign for Chips Ahoy).

After substantial touring across the US, but no money to show for his success, Chuck found himself looking for inspiration. He found it in his next hit, the Billboard charting “We Need Some Money,” which propelled him around the world again. Brown then revisited his love of jazz and created the “Go Go Swing Medley,” introducing people around the world to classics by Duke Ellington, Johnny Mercer, and James Moody, spun in Chuck’s inimitable way. Released independently and later on Polygram Records, Chuck Brown and the Soul Searchers once again reached an international audience through a 1985 at Holland’s North Seas Jazz Festival. In between sets by Curtis Mayfield and James Brown, Chuck schooled everyone on the genre he created. That same year, Chris Blackwell introduced the movie “Good to Go,” a much hyped but poor reflection of the scene. Nonetheless other artists, such as Salt N Pepa, Kurtis Blow, and Grace Jones, began incorporating his sound in their music. Brown continued to record, perform in the US, with stints in Europe and Japan in the nineties.

After a string of live recordings, he met at the time an undiscovered, shy talent by the name of Eva Cassidy in the early nineties. His lifelong dream of singing with a lady, springing from his love of duets by the likes of Louis Armstrong with Ella Fitzgerald and Billy Eckstine with Sarah Vaughan, came to fruition with the critically acclaimed and worldwide release of “The Other Side” by Chuck Brown and Eva Cassidy (which contained the original recording of the worldwide Eva Cassidy hit “Over the Rainbow”). He dedicated a jazz standards album to Ms. Cassidy after her tragic loss to cancer.

In 2001, he released the Billboard charting “Your Game... Live at the 9:30 Club” which was voted as one of the top 10 albums of 2001 by Billboard’s R&B Editor, Rapper Chuck D and others. A live DVD came next, called “quite possibly the greatest live concert video/DVD I have ever seen” by Murder Dog Magazine. The same year a double remastered “Best Of” album was released. In 2006 the National Endowment for the Arts awarded Chuck a “Lifetime Heritage Fellowship,” the Federal Government’s highest honor for folk and traditional arts, and Chuck also performed at the Rock And Roll Hall of Fame in 2006. The following year his “We’re About the Business” CD debuted as the #1 independent album and #2 R&B album in Billboard. The National Visionary Leadership Project recognized Chuck’s contributions in shaping American history in 2007, joining previous honorees such as Ray Charles, Quincy Jones, BB King, and Earth Kitt.

Chuck recorded with artists as diverse as Thievery Corporation, Brian Culbertson , Jeff Majors and Kindred the Family Soul. A street in Washington DC was renamed “Chuck Brown Way.” In September 2010 Brown released an ambitious three disc set “We Got This” which includes the Grammy nominated song LOVE featuring Jill Scott with Marcus Miller. As part of the support for the new album some recent appearances include the Jimmy Fallon Show with The Roots, the Mo’Nique show, NPR’s Tiny Desk Unit, and NPR’s World Café. The National Symphony Orchestra paid tribute to Chuck Brown in September 2011 with 2 commissioned works of orchestral arrangements and a performance on the West Lawn of the US Capitol. Attended by an estimated 50,000 people the NSO and Chuck performed together, followed by his band in concert with guests Doug E Fresh and Sugar Bear. Chuck Brown passed away on May 16, 2012. Chuck Brown Memorial Park opened on August 22, 2014. The Chuck Brown Band, who toured the world with the Godfather carries the torch and keeps the beat and legacy alive. 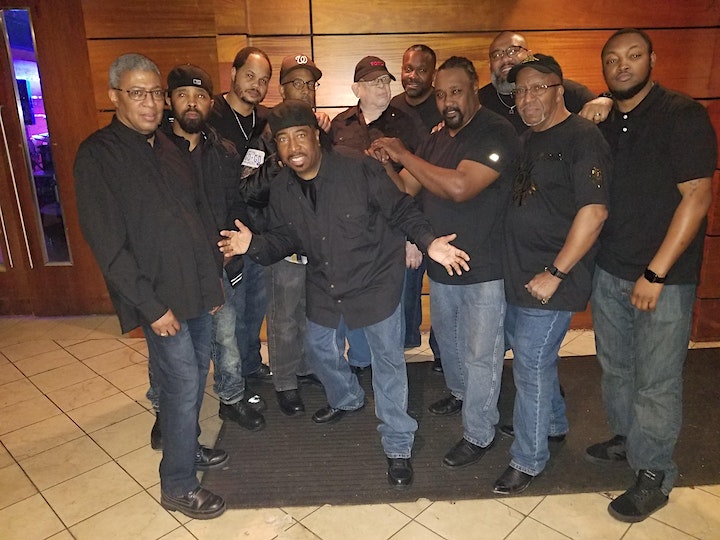 PU is a funky, jazzy, bluesy, creative dance band with seasoned veterans including two members of the original Soul Searchers, Lloyd Pinchback on saxophone and cowbell, and John Buchanan on Flugabone and keyboards. Tony Bron plays trumpet and flugelhorn and Wayne Davis plays bass guitar to round out our brass and rhythm sections.

Our major mentor and inspiration was Chuck Brown, who, along with the Soul Searchers, was actually pivotal in creating the style of music known as DC Go-Go.

Whenever we play, a groovy time is guarunteed!