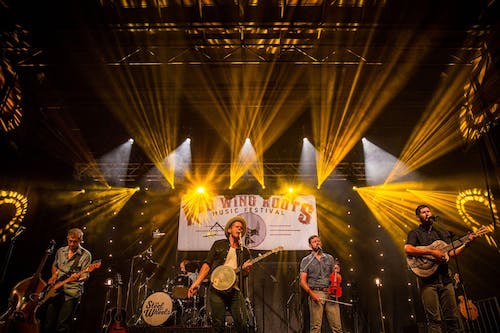 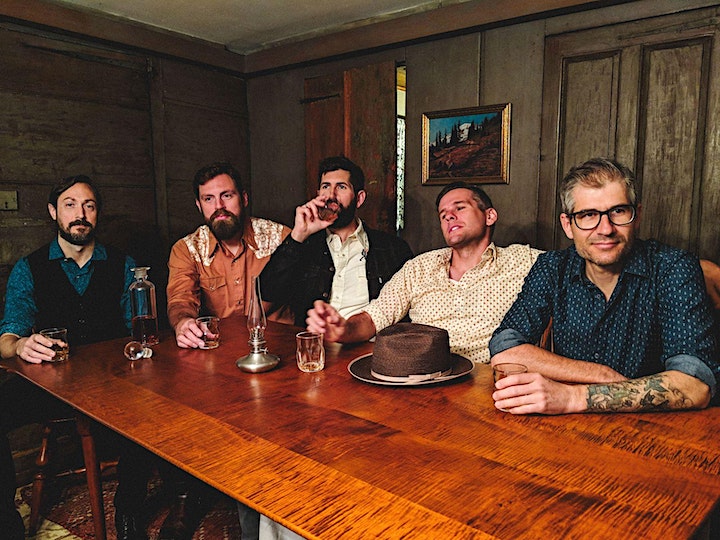 Virginia-based acoustic roots music collective The Steel Wheels have announced the July 12th release of their 7th full-length album, Over The Trees. Recorded in Maine with producer Sam Kassirer, Over The Trees draws attention to the impeccable harmonies of the four original members: Trent Wagler (guitar/banjo), Eric Brubaker (fiddle), Brian Dickel (bass), and Jay Lapp (guitars/mandolin). Kevin Garcia, who plays multiple percussion instruments, keyboard, and mallet-based instruments, formally joined the band after the 2017 release of Wild as We Came Here, which Kassirer also produced. In addition to familiar-to-fans harmonies, The Steel Wheels ventured a little farther out of their known comfort zone for Over The Trees. “This is a bit of an experimental record at times, with new sounds and influences,” Wagler says. “We know where we come from. We are a string band from Virginia, but we are evolving with this album, and we are embracing the future.” 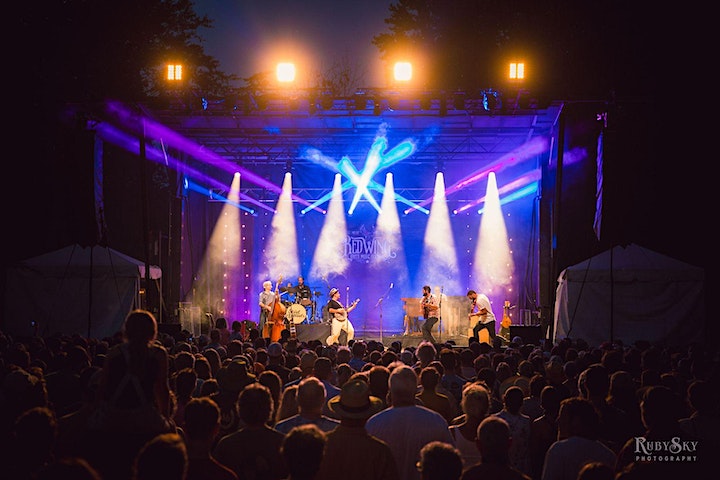 Over The Trees opens with the percussion-heavy groove of “Rains Come,” a rehashing of the classic tale of Noah and his ark in relation to today’s contingency of climate change deniers. “If there are real dangers ahead in our planet’s hope for survival, why isn’t it all any of us are talking about?” asks Wagler, the song’s primary writer. “It’s overwhelming, that’s why. I don’t like admitting that I get stuck right there, but this song offers some of those questions.” A little deeper into the record, the swampy chant of “Something New” ushers in a recurring theme on Over The Trees; mantra and meditation. “Get To Work” is another tune that falls under the theme. Wagler muses, “I know that ‘Get To Work’ is self-talk for when I’m feeling down, when I’m feeling overwhelmed, or when I’m feeling like, ‘Ugh, what do we do this for?’” Certainly though, not all the songs on Over The Trees fall so neatly under that umbrella. “Time To Rest,” co-written by Wagler and southern songstress Sarah Siskind, reflects on the weight of letting down friends or loved ones in a lilting feel that Wagler calls “an implied Levon Helm swing.” The album closes with “This Year,” a wistful a cappella ode to keeping an optimistic spirit, even down to showing gratitude for the cat who is waiting for you when you finally get home.

On the whole, Over The Trees is a collection of songs about surviving tragedy. “At times our human response is muted and resigned, at other times triumphant and steadfast,” notes The Steel Wheels’ fiddle master Eric Brubaker, who’s outlook on the album changed significantly when he lost his 10 year old daughter to a sudden illness earlier this year. "Over the Trees is an ode to the community that rises up to support those in need, and is dedicated to the memory of Norah Brubaker."

The release of Over The Trees coincides with the band’s Red Wing Roots Music Festival, which they have hosted and curated for seven years. “Lucky number seven, can you believe it?” said Wagler. “The changes of seasons in Virginia are always something to behold. The colors of fall, the cool, quiet, darkness of winter, and the new growth of spring bringing us to our full bloom in the heat of summer. Summertime brings vacation for many, perhaps a slower pace, but in our modern age, it also comes with so many great choices for recreation and fun. We are charmed and delighted that somewhere along the way, among all the different choices, so many of you have joined our Red Wing family.” The community of Red Wing and the greater community of Steel Wheels fans have been the driving factor of what sets the band apart from their contemporaries and peers in a densely populated digital age. The love and kindness that breathes life into The Steel Wheels’ music flows freely from the stage, into the audience, and is taken from there into the world as a medicine; a much-needed pick-me-up for today’s trying times. 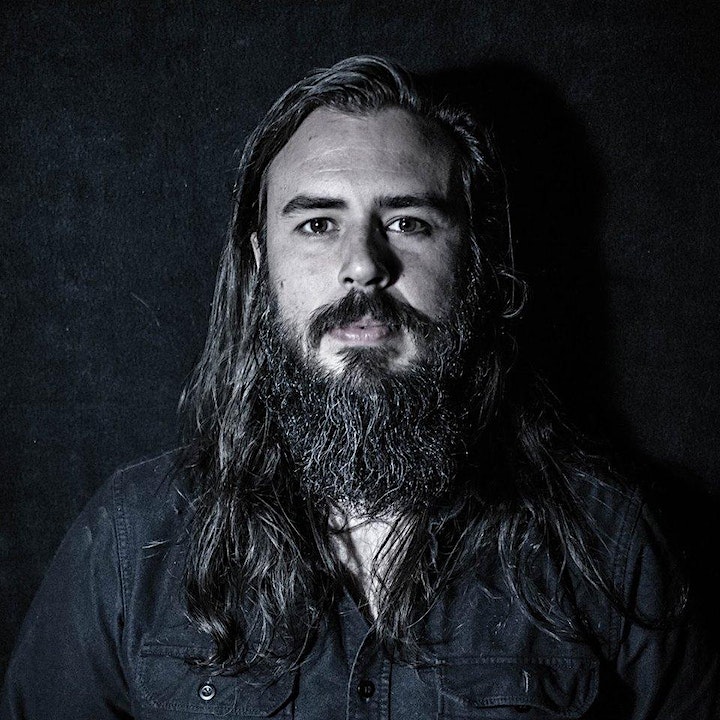 Justin Jones is “rock and roll….No Auto-Tune, no gimmicks—just a songwriter with a guitar and a crack band,” says The Vinyl District’s Jennifer Carney. With a musical career that spans more than a decade, Virginia native Justin Jones is taking his soul-stirring brand of rock and roll on the road for his I Can Feel It Tour 2013 of the U.S.

Weaned in the sounds of southern soul, blues, and rock, Jones started playing open mic nights in Charlottesville near his hometown in his early teens. His first album, Blue Dreams - recorded in 2004, is the cornerstone of what turns out to be this prolific singer-songwriter’s catalog of albums, including Love Versus Heroin, I Am the Song of the Drunkards, and The Little Fox, that express both the lows and highs of love and life. “The songs I write and the music my band and I play, in my mind, is quintessentially American... It lives and breathes in the landscape that is America… sometimes soulful and sometimes stark… sometimes hard and sometimes lush. I like to think I write beautiful songs about death, sad songs about love, and hopeful songs about life. What I consider a kind of secular spiritual music.” Fading Light, Justin’s fifth album, was released in 2012. Produced by Jamie Candiloro, best known for his work with Ryan Adams and R.E.M., Fading Light is a collection of songs written over a two-year stretch.

In 2012, Jones took his emotionally charged live show on the road. His busiest tour to date, Jones and his band played 130 shows across North America, including stops at Virgin Mobile Festival, Floyd Festival, and the Austin City Limits Music Festival (ACL). It is no wonder Speakers in Code names Justin Jones one of the top-ten performances at ACL 2012, and Bob Boilen of NPR’s All Songs Considered lists Justin Jones “as one of the top performances of the year.” And all signs point to Justin Jones surpassing this momentum in 2013, with a new album and documentary on the way, an upcoming U.S. tour, and talk of a European debut.